Any assistance is very much appreciated, and thank you in advance.

I’ve been testing this lately while troubleshooting another issue, and here’s what I’ve found.

If your drives are still good, you can put them in another similar WDBLW enclosure and read them. The capacity of the enclosure shouldn’t matter; a 4TB (2x2TB) vs a 12TB (2x6TB) should be the same enclosure with different size disks installed.

Normally, I’d recommend putting in one drive at a time to isolate any problems, but after doing that on my WDBLW 2x2TB, it wouldn’t rebuild the array or let me get my data with both drives in. Either drive reads fine by itself, but both together are now unreadable.

You can’t just connect one of the drives to a USB adapter and read it due to the built in encryption.

Here’s a link to a compatibility matrix:
https://support-en.wd.com/app/answers/detail/a_id/1837/kw/replace%20failed%20drive%20duo

Thanks for the prompt reply; based on what you said:

Now it appears the next challenge is to find an Enclosure with a similar number.

Anyone having such an Enclosure if is willing let go of it please feel free to let me know.

Also if there are other advise from anyone, please feel free to share. Much appreciated.

Thanks again and best regards

I see that the link doesn’t include WDBLW drives, but it worked on mine. I have 2 WDBLW drives at my desk, and am troubleshooting a different problem, so switched drives between the two enclosures. Both sets of drives worked in both enclosures.

Here’s a link for an empty 16TB Mybook Duo enclosure that looks like the correct one, but you’d want to verify the WDPN with the vendor. They have warnings that it won’t work with drives below 6TB, so you should be OK. I’ve only used 2TB and 3TB drives in mine, but it might be worth a try. 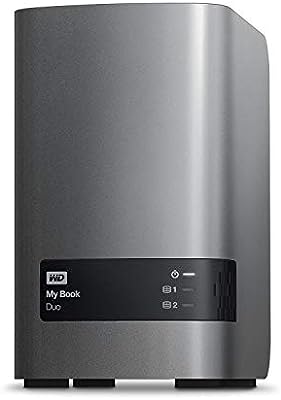 There are also units available on ebay. Always a bit of a gamble…

This is good information, thanks.

Will try to search for comparable Enclosures in the market. I checked, my WD My Book Duo uses Red NAS HDDs, which I believe is what the sellers have stated as well.

May I know if you are on RAID 1 configuration? Thanks.

Anyway, good news; thanks to your advise, I manage to buy a used WD Enclosure (with the same Product Number (P/N)) and access my original 2 HDDs in the normal way. All files are successfully back-up into a new (non-encrypted) HDD!!! Thanks.

As for my current back-up system, originally, I wanted to use 2 HDDs on the new HDD Bay and carry out manual duplication and not use the WD Enclosure due to the concern with the encryption issue. But as I will have 2 WD My Book Enclosures with the same P/N (I hope) and excess HDD capacity (with the addition of the New 3rd HDD), I decided for the mean time to use 3 HDDs for back up, i.e. the New 3rd HDD in the new HDD Bay (non-encrypted) plus 2 HDDs in the WD Enclosure (unfortunately auto encrypted, and under RAID 1 configuration). This means I have to manually duplicate files between the New 3rd HDD and the 2 HDDs (in the WD Enclosure). But still trying to figure out the best way to set up the new back-up system.

Another thing just for sharing, I am not sure how true this is but it make sense to me; whilst scouting for data recovery services, one of the service providers advise me if possible not to use more than 2TB HDDs (each) for back-up system, as data recovery on larger HDDs may be more tedious and the risk of data loss may be more critical due to the larger number of files that may be stored in the HDD.

Hope this will help anyone having similar issues.

Thanks for the update - lots of good info. It’s good you got your data back!

I’ve got a handful of different WD RAID solutions, local and networked, and this has me a bit worried about the risk of losing data if an enclosure goes out and I can’t get another close enough to it.

I believe I’ll start migrating into other, non-encrypted enclosures where the HDs can be read on a standard USB/SATA adapter, just to avoid future headaches.

Please feel free to share if you do find a good solution for a back-up system that is not encrypted (which can be “plugged and play” on any USB/SATA connection) and that can automatically duplicate files into (at least) 2 HDDs simultaneously.