Consider whether the 40-year-old protocol SMB 1.0 should not be used

Apparently My Cloud with 04.xx-xxx.xxx firmware uses this protocol to make the Computer Browser protocol work. As the protocol is disabled on new operating systems such as Windows 10 and 11, My Cloud will not be automatically detected in for example Windows Explorer.

To work around this, Western Digital proposes to enable support for SMB 1 on PC’s, and thus open up a number of security vulnerabilities. Just search “smb1 vulnerability” in a browser to see for yourself…

We have been using My Cloud for years without enabling SMB 1 on our computers. Apart from My Cloud, we do not have legacy printers, software or computing equipment that rely on SMB 1.

To access shared folders or the UI on My Cloud, we have simply created 2 shortcuts on the desktops.

If desired, you can easily connect network drives to Windows letters. The desktop shortcuts can be used on the LAN, or on the WAN if VPN is used.

Below are the shortcuts on my computers for opening the UI and Public folders on my 1st generation WDMYCLOUD.

If I open the Public folder then my WDMYCLOUD shows under Network and I can open all my Shares. 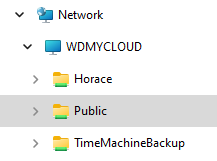 My WDMYCLOUD 1st generation is a home network device now.

Yes, this is also my preferred method of accessing My Cloud in Windows Explorer. Only one click, without SMB1 being activated on the PC is all that is needed…

Many recommend enabling SMB 1 on PCs because they believe that when My Cloud uses SMB 1, the PC must also use it. That’s not how it works.

The Microsoft SMB protocol used with lower-level transport layer protocol NetBIOS over TCP/IP is generally used for backward compatibility. This means that SMB 2/3 protocols can use all features of SMB 1, but the lack of Computer Browser protocol means that My Cloud will not be automatically detected.

Western Digital has a website showing how to enable SMB 1 on Windows. I’m pretty sure that the website is intended for those who have legacy printers, software or computing equipment that rely on SMB 1, and are therefore forced to use the protocol.

So there are merits to establishing shortcuts to these “SMB1.0” devices (i.e. the old OS3 devices) and keeping SMB1.0 completely disabled on the PC

For my use case, I prefer to keep SMB1.0 client enabled for a simple reason: My computers flip between three networks. Sometimes, they are on two networks at once (One on wireless; the other wired). The NAS units generally stay on a single network; but my WdWireless Passports can flip between the networks.

SMB1.0 client being enabled at least allows me to keep my head straight regarding what is actually available to the PC at a given time.

On my system, actually the SMB 1.0 read of the master browser was actually very unreliable until about 2 months ago; where SMB1.0 devices refused to reliably appear. (the behavior was consistent between three-five PC’s operating with 3 individual networks) (I don’t know what changed - - -some random Win10 update that rolled out across the machines)

Why the complicated setup?
Well:
Network 1 - - - general use home network (with internet) OS/3 nas units don’t go here.
Network 2 - - - NAS network at home. NO internet access. All the NAS units are on this router.
Network 3 - - - Remote location. WIth internet. One or two PC’s go there every week for a few days.
NAS units only occasionally go here. (although the WD Wireless passports are frequently there)

I admit to being an “edge case” and
“your milage may vary”.

If the LAN is scaled up with more networks, users, computer equipment, operating systems, etc. I can see that things become more complicated.

But, even in your case I would have considered disabling SMB 1 on PCs.

You have several NASs. Perhaps they can take over more of the tasks in the LAN, and let My Cloud become a backup that is used by a few users? Also, both My Cloud and My Passport Wireless can use the alternative protocols AFP or FTP, and My Cloud can additionally use NFS…