i have a problem accessing my WDTVLiveHub under Windows 10. I can see it under my Network but if i try to access it as a Computer it shows me attached message. 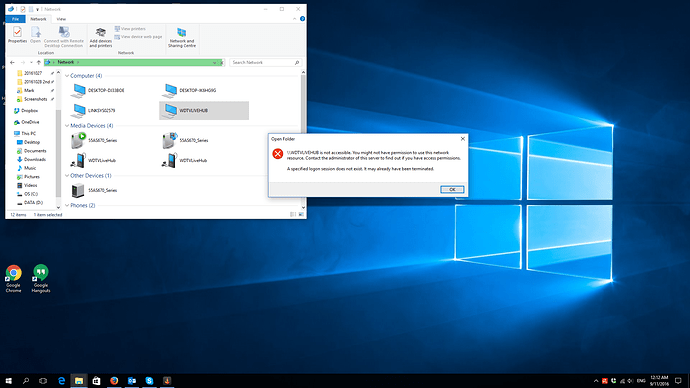 Previously the WDTVLiveHub showed up as a network drive.I tried to map it manually but failed somehow. Sorry, I am not a great computer expert but that’s really annoying as it was always working fine before. Appreciate any help to a network noob.

Probably it’s a windows setting but not sure how to do it.

What have you tried so far? IS your WD TV Live Hub HD Media Center able to access content stored in your system? Or other computers able to interact with your unit?

Well, on my old computer with windows 7 the WDTV Live Hub appeared as a mapped network drive automatically when i connected it with the ethernet cable. Even on my new computer with windows 10 it appeared, but just at the very early days. Now it appears as a computer in windows 10 but no more mapped drive… I can still access it over this online page “… monkey” or whatever it is called, but that’s very inconvenient. Copy and paste from computer to the WDTV Live Hub was always nice to use (even though a bit slow). I have the same problem on my windows 10 notebook as well as my windows 10 desktop PC.

I really don’t know what’s the actual problem. Probably i am just to stupid to manually map it so every help is welcome.

I am seeing the same message on my PC. Its always had windows 10 and it use to work but recently stopped working. Not exactly sure what’s going on.

Same Problem started with me also after 5 years of bliss.
I think it may be a setting in the WDTVLiveHub menu as I did reset the settings in the menu.

I haven’t had a chance to look there yet but that’s the only thing I remember changing.

Like many members here, I regularly “see” my two WDTVLIVEHUBs from my WINDOW 10 computer[s]. BUT! I recently did have a problem where some SETTINGS on WDTVLIVEHUB - settings I hadn’t changed in years - mysteriously got reset. After tearing some of my sparse hair out, I changed some settings about WINDOWS SERVER and DLNA, and now everything’s fine again. Phase of the moon!?!?!?

OK Fixed easily enough. Not sure if you actually had to do these steps but it worked for me.
In the WDTVLiveHub menu I actually gave the device a login name=admin and a password.
I went to Windows10 WinTen Win10 and opened Network and Sharing Centre,Change Advanced Sharing Options.
All Networks menu, and selected Turn On Sharing so anyone can access.
I the selected the network share and a user name and password prompt appeared and I logged in with the new username=admin and password. Working as before.

I’ve got the same problem. MrCyberdude’s instructions didn’t work (or I didn’t understand them). I would really like to access the Live Hub’s drive from my computer to keep my music files updated. Any other ideas?

run Turn Windows features on or off
go to SMB 1.0 support, click the drop down and enable for client 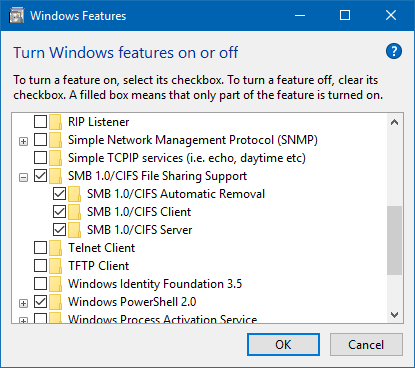 Reboot windows and the hub should be back as a writable location. 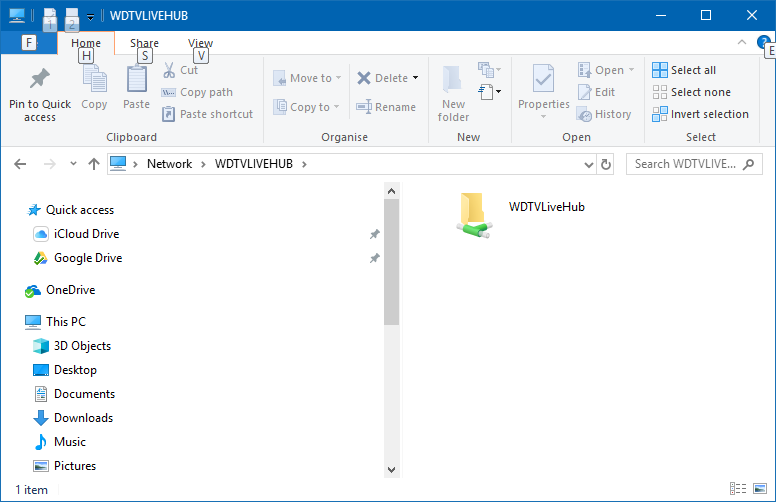 I should have re-replied a 2nd time. I had this same problem trying to connect new Windows 10 machine. I got past it after trying numerous things, and wasn’t sure what had worked at the time I first posted to this thread. But another post on this thread here clearly hits the nail on the head — Windows 10 shut down the older SMB 1.0 network protocol as a possible security problem. WD assumes SMB 1.0 as its way to talk to local PCs/Drives on a local network. You can re-enable SMB 1.0 on Windows 10 as shown clearly in another post here. I’m no network guru, but I’m not aware of any serious security exposure you would create on a small home network, by doing so…

ALL is OK but Do Not Enable the option of SMB Automatic Removal which will keep removing the feature after 10 minutes of usage for the sake of security concerns. (SMB is seen as a potential security breach backdoor and has been exploited by some mean viruses)