I replaced the 4 8TB drives with 4 10TB drives, one at a time, letting it rebuild the RAID in between each drive swap out.

I then went through the procedure to expand the RAID 5 volume to include the extra space.

Since then, it’s been saying “Resizing”, but doesn’t seem to actually be doing anything.

That was November 7th, almost two months ago. Now I’m stuck. The reason I upgraded the drives is because I was running out of room (Plex), so there’s about 20TB of data, and nothing large enough to back it up to so that I can wipe NAS and start setup from the beginning. It won’t let me upgrade to the new firmware. I won’t even let me power down.

I know how to SSH in to it, but I’m not a Linux person, so don’t know my way around in the OS very well. Is there anything that can be done within the OS to fix the this? If so, please go slow and explain things so a non-Linux person can follow along.

Thanks for any help anyone can give.

Upgrading 4 8TB drives to 10TB drives is not recommended as the data is at risk (degraded raid) for more than a week during the rebuild.
Anyway you got quite far.
Please share the raid status

I tried to keep I/O to a minimum during the rebuilds (mostly to access the web interface for checking on the rebuild status), and made sure the RAID was in a healthy state before swapping the next drive.

Mandatory disclaimer: all these commands are at your own risk. It is recommended to call WD support first.

EDIT: growing the main partition can be done while mounted.

If it didn’t grow, it could be that the partitions are still to small.
In that case, please show the partition table.

Press p to print the partition table. Press q to quit.
Minor remark: please add markup in the posts here on the forum by selecting the text and press CTRL-SHIFT-C.

Again the disclaimer: use at your own risk.

Thank you so much for this help. Your instructions were extremely easy to follow and very helpful.

I started the process using your original walk-thru instructions.

I shut down the apps (Plex) through the web UI before starting.
I then connected using PuTTY and tried to unmount and it said it was busy (like you’d said it might do).
I ran the check for running processes. There were a couple, so I did a quick Google search and killed them.
I checked for running apps, and it didn’t list any (Plex is all I run, and it’d already been stopped).
It then allowed me to do the unmount.
I did the check, and it said it was clean, and gave the number of files and blocks.
I then started the resize. That was around 4:30am EST. It echoed back the resize2fs version and date, and it’s been sitting there since (over 13 hours) without returning the cursor to me. I’m hearing no sound, feeling no vibration, and seeing no flashing HD access lights on the NAS - no feedback at all on if anything is actually happening. Is there a command to check the status, if I connect with a second instance of PuTTY?

Should I continue to wait? If so, how long?

It’s odd that it doesn’t do anything… there should be similar to a rebuild.
Try to open a second putty session and see if the partition is growing with

This command shows the md1 filesystem every 2 seconds.
If it really is stuck and doing nothing, you may CTRL-C. EDIT: and reboot

The resize2fs command also has a -p flag to display the progress.

I started the watch a couple minutes after 6:00am EST. There wasn’t any change to any of the numbers for over an hour, so I killed the resize.

I went through all the steps again, just to make sure I didn’t miss anything. Still got the same results - when I run the resize2fs, it just sits there.

I did a bit of Googling on “resize2fs not working”, and trying some of the things I found. One of the first things I found is that resize2fs is supposed to display

as soon as it starts. When I run it, it’s not doing that - it just displays the version number and sits there, never displaying the second line.

Next thing I found is that people were saying that an fdisk needed to be run to change the partition size before it could be resized. I tried fdisk (no parameters), just to see what it’d say, and it says that it’s not found, so that’s out.

After thinking about it for a while, about why it wouldn’t run, and wondered if maybe it wouldn’t run because there was an instance of it already being run by the WD OS. So, I searched for how to find out if resize2fs was already running, and found “top”. Ran it, and it shows this:

Since that’s not the parameters that I used (and I’d killed mine), it must be coming from the WD OS.

Looks like, at least for the moment, I’m at a standstill until I figure out what way I want to go with this.

Thanks for all your help. Hopefully, if nothing else, others that run into a resizing issue will see this thread and it’ll help them out.

Good find.
Here’s some numbers for shrinking a partition: 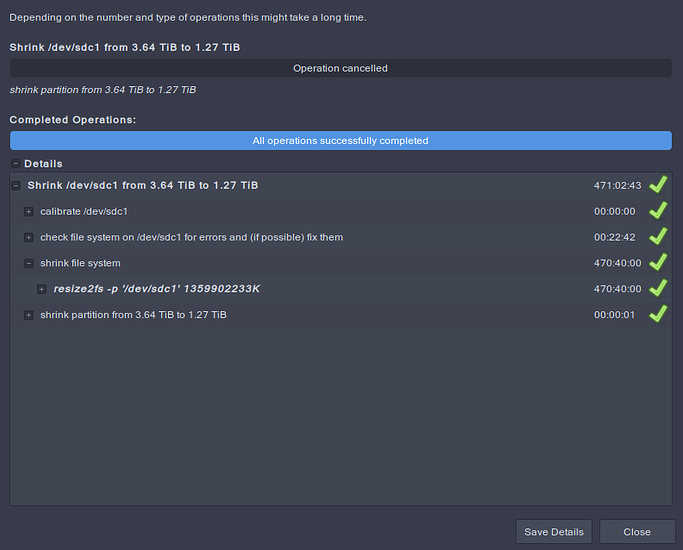 Took just over 19 and a half days.

Borrowing a 20TB NAS might be an option for you… or just an empty NAS to seat the old 8TB disks.
After a backup of the critical data, I’d dare to kill the process, run fsck and resize2fs -p -d 14 manually.

resize2fs seems stuck at pass 3 (scanning inode table) - what to do?

WD My Cloud uses GPT partition tables, managed with gdisk instead of fdisk. Here’s a lucky google result for more info. You don’t need to make any changes with gdisk here.

Main takeaway: don’t resize 20TB+, just get another box and transfer the data. It’s much faster and you don’t put your data at risk by running on a degraded array for a week.

You may want to look into Debian + OMV + ZFS for more control over your array.
It allows you to monitor the status of the scans and the so-called resilver process pretty easily… here with ext4 you’re left in the dark.

Did you ever find a solution other than starting over and reformatting and rebuilding a new empty RAID 5 volume and restoring all your data?

Unfortunately, no. After letting it sit for several days in the stalled state, I finally just had to get an EX4100 with 4 10TB drives, copy the Dara over, then wipe the box back nothing and start like it was new.

On the up side, I ended up doubling my NAS capacity because of the EX4100. On the down side, that wasn’t cheap.

Interesting thread… I got two PR4100s stuffed with 6TB reds and I got a stack of 10TB reds ready to go. Both on plain RAID5 with three accounts, PLEX, smb and shares.

I didn’t know it supported resizing.

My concern with swapping the drives is that I’ll lose the configuration. I was informed a while back that that resides in the storage, not the internal “drive”… Is that true?