I was researching about how to replace our current WD firmware with another one and i only found the great efforts of  Fox_exe, to install clean debian or OMV  which is great but still is not very friendly for me

but i came across the synology DSM 5.1 and it looks great and i had alot of features

and they have a version of the software compiled for it here  synology DS414j OS Pat file and also the source code is here  synology Source Code for MINDSPEED Comcerto C2000.

so i started to think will this be an option to install the Synology DSM 5.1 to our WD my cloud

can someone from our experts take a look and direct me on where to start ?

Hi and welcome to the WD community.

I have not tried this, but lets see if another user can help you out with some tips and information on how you can start your project.

Thanks, for your wishes

it would be great if we can do it

Here is my trials to this but so far no success

any other thoughts are appreciated

DISCLAIMER:  This forum is not a WD Legal Venue, and I am not a lawyer, so take this for what it’s worth.

All you’re entitled to use is the GPL code, which is the only source code Synology must release.

All you’re entitled to use is the GPL code, which is the only source code Synology must release.

Depends which version of the GPL the code is using.  I’ve just torn out a useful article from a technical journal about FOSS*, which says:

“Other licences - sometimes termed ‘copyleft’ or ‘viral’ licences - require that all software, even if you have added to it or modified it, must be made available publicly, usually under the same licence terms.  One example of such a licence is GPL (currently GPL Version 3).”

My understanding is that the Lesser GPL only requires you to make public changes you have made to the original code base, and that you are not obliged to make public any additional code you have written around that code base.

I would suggest that if Synology have released it, then they must be working under the full GPL; why would you release your intellectual property unless you were legally obliged to do so…?  If they haven’t released all their code, you won’t be able to make a Synology image that will run on a WD platform, as the code will be incomplete…

Likewise, IANAL, and *Free and Open Source Software is an interesting branch of Intellectual Property Law…

I am not a legal guy

It is on sourceforge for public download from here   SourceForge reprosatory

I hope that i am not in violation of any laws :)

thanks for the advice 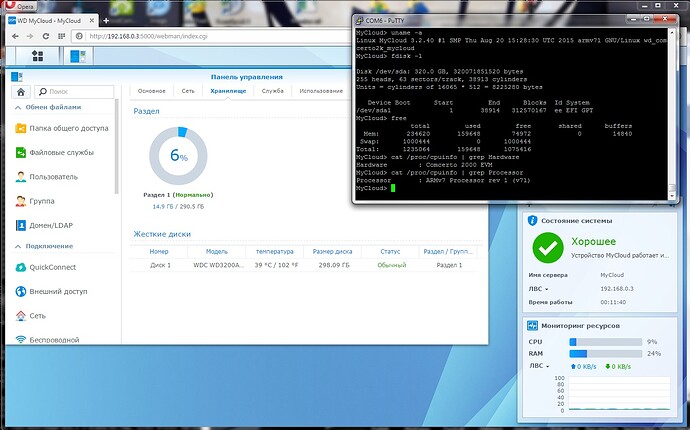 Man you are a king

I will try it and let you know

I will be more than happy to test for you

I think, i fix it all.
Redownload scripts/images from Google drive.

can anyone come out with a tutorial on how to instal DSM on wd EX2?

This sounds awesome!
Super keen if someone can make it (intermediate) user friendly!

I too am eager interested in the possibility of having the Sinology GPL software working on my EX2. I already am running the XPEnology software on a Dell desktop with great success and happiness, but can only imagine how great it would be, running on this very small, portable 2 drive EX2 unit. Possibly I can help advance your already great work and successes so far!

Hi there, thanks for your work on dsm fox.

I’m trying to build from a bare disk from my old 4tb we cloud, previously wiped.

I’ve follows the partitioning instructions and when I get to mounting sdb3 it fails. Doing an fsck on the disk throws up super block and inode errors a plenty

I must be doin something obviously wrong, any ideas?

got it almost working. just had to reformat /dev/sdb3

so now it boots, but it seems to have left-overs from my old WD cloud (device is called MyCloud in the synology finder, login screen background is WD cloud logo)

more importantly, i don’t know how to login? what is the admin password in your image? or is there another way to reset it

many thanks for this build - really helpful!

it seems to have left-overs from my old WD cloud

I did it just for lolz

You can change it in “Apperance” or in “User settings” (For admin, top right button in web gui)