I purchased a new PR4100 two days ago. The front USB drive auto upload feature wasn’t working. I tried upgrading to the latest firmware - but it got stuck at 99%

So I can not upgrade the firmware - and the USB application is also not available in the apps. Due to which I can not use the auto upload feature for USBs.

Support hasn’t been able to find solution for past two days. So I thought I should check with others on the forum - to see if they have encountered similar issued and how were these resolved.

Thanks for your help

Do you know the current firmware version, the version of the firmware prior to the update attempt? A 40 second reset may help. Otherwise, more advanced methods may be required.

Learn how to Pin Reset and System Only Restore a Western Digital My Cloud OS 5 devices. This process will not erase your data.

Thanks for your reply DXA.

After remaining stuck for more than 10 seconds, it issues the error: “Download failed”

And the support made me do the 40 second reset. It didn’t work. The only difference now is that when I try to do the update, it stays stuck at 99% but then issues an error after around 15 minutes that download has failed. (earlier, it remained stuck at 99% for much longer)

It should be easy enough to fix. Are you comfortable with enabling SSH and using basic Linux commands?

Thanks DXA. I wouldn’t’ be comfortable due to security concerns.
Thank you for your help!

I wouldn’t’ be comfortable due to security concerns.

If the first step is successful, you can then try uploading the latest firmware again.

Otherwise, you’re stuck because using SSH and basic Linux commands is the ONLY remaining way to fix your problem.

I once had the same problem and a manual firmware update did the trick.

Saw this post and have had the same issue. But here is the fix YMMV this worked for me.
Current firmware in the drive is : 5.11.112 and would get the dreaded stuck at 99% Manual upgrade gave the message firmware file not found.

Rebooted the device and upgraded to this; 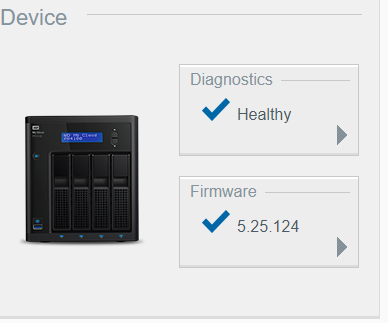 Here is the article to that explain the workaround.

I have the same problem.

After reading this thread I tried:

I noticed that the files up to version 5.13.115 are less than 200MB, the next ones are over, maybe it has something to do with it?

Howdy. I have tried manually updating several higher and lower firmwares, reboots, hd raid rebuilds and it will not update to anything. I am at 5.14.105.
It always errors out saying Firmware not found.
Right now I tried the download again and it goes to 99% over and over again.
If I try manually it downloads anywhere from 5% to 10% then shows installing at (0%) then just shows (%) and gives me the Firmware Not Found error. uhg

Sooo if you don’t mind, can you post the SSH stuff and commands I need to runs I can update this thing? I use another nas that does have the current 5.26.119 firmware on it and I need this one to work so I can use the backups on it.

p.s. I have also already tried the WD workaround with that 5.17.107 with the same results, Firmware Not Found.

Thanks so much in advance!