I’ve read of successful installs with both the SN750 and SN850. What’s your experience been?

[Note: I know an adapter is needed, and a 3 mm heatsink is also recommended.]

And, when installed in a 2019 iMac, is there a performance difference between them? The iMac is 4 x PCIe 3.0, and the SN750 is also PCIe 3.0; the SN850 is PCIe 4.0. Normally one would think there would be no benefit to installing a PCIe 4.0 SSD into a PCIe 3.0 bus, but it’s my understanding that what limits SSD speeds with PCIe 3.0 isn’t the bus, but rather the SSD’s themselves – they’re far from saturating PCIe 3.0 connection speeds. This at least suggests that a PCIe 4.0 SSD would give better performance even if with PCIe 3.0 bus. But I don’t know what is actually the case.

Also: The iMac only has space for a 3 mm thick heatsink. How thick is the SN850’s built-in heatsink? Based on pictures, it seems quite a bit thicker.

Anyways, that’s what I know. Would like to hear from folks with actual experience doing this upgrade.

Have you opened a Support Case? If not opened, for more information, please contact the WD Technical Support team for the best assistance:
https://support-en.wd.com/app/ask

OK, I opened one. Let’s see what they say.

The SN850 hs been working beautifully, and without issue, in my 2019 27" i9 iMac, for the past seven months. I don’t know how well it will work in a 2015 iMac. I’d recommend you search through this this thread at MacRumors to see what has and hasn’t worked on your model: 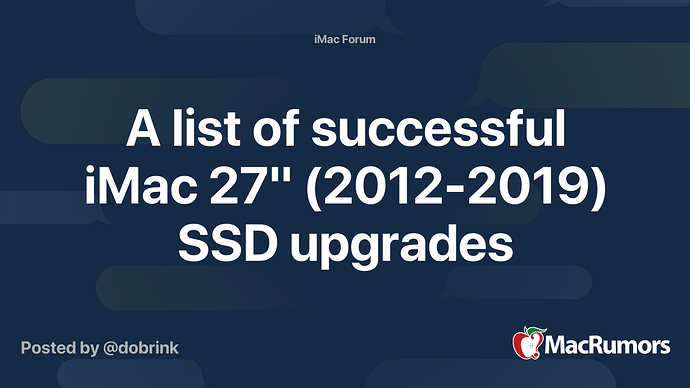 Here you can find and discuss all the collected knowledge regarding upgrading the HDD, blade SSD and CPU of a 27" iMac 2012-2019, as well as a list of performed upgrades. Here is a list of all 27" iMac models subjected in this thread: Late 2012 -...

Using the keyword “SN850”, the oldest iMac I found on which someone had installed that SSD is from 2017. So you can post on that thread and ask if they think the SN850/850x would work in your 2015 iMac, or you could try it yourself. If you don’t want to take the risk, you could instead get one of the SSD’s that have been shown to work on the 2015 iMac.

Installing the SSD requires taking off the glass panel, which I wasn’t comfortable doing, so I took it to the Apple Authorized Service Center at my local university, and they did the installation for ~$100.

Note: While the Samsung SSDs are also very good, there are TRIM issues with some of them on the iMac, so it’s probably safest to avoid them.