If using a Linux PC or boot disk/flash drive, you may have make sure /dev/sdg1 is unmounted, or otherwise not being used, before running the mkswap command. Linux may be auto mounting the partitions when one exits parted.

Hi all, I know this topic is a little bit old, but I recently also upgraded the My Cloud (gen 1) disk from 2TB (WD Red) to 4TB (HGST), but I’m running into the same issue as @superswade, that is that all disks have an unknown filesystem and the My Cloud doesn’t start (no IP address visible in router, led almost constantly white → only (frequently) goes off very short).
I didn’t extend the largest volume yet, only did a clone in CloneZilla with both disks connected via an USB adapter with the exact steps from @Proglin’s opening post.

I really prefer to keep my setup they way it is, instead of ‘unbricking’ via @Fox_exe’s steps, since I also did a lot of custom security scripts and setups via SSH a while ago. I’m not a Linux expert, so I’d like to copy the things I did back then instead of trying to reproduce what I did back then.

Thanks in advance for your help!

As a troubleshooting step try doing a 40 second reset if you haven’t tried it already after performing the cloning.

I had trouble trying to clone using CloneZilla. Found I had to use different USB to SATA adapter(s). One may have to try doing a sector by sector clone. One may have to try using a different computer. If one has access to a two hard drive docking station that will clone drives, one can try using it to clone one drive to another. CloneZilla has a basic guide for doing a disk to disk clone.

Hi Robert,
I first tried mirroring the entire drive using Clonezilla too but found that the Linux RAID partitions couldn’t be cloned. I ended up applying the software to the new drive as instructed via this info:
https://digitalhemi.com/files/misc/WD-NAS/Gen1/Replace%20HDD%20-%20English.txt
That worked for me.

As posted previously up thread there is a archive repository of user Fox_exe’s single bay My Cloud unbrick files here: https://wd.hides.su/fox_exe/

The last firmware for the discontinued OS3 single bay My Cloud units can be downloaded directly from the WD Support link top of page, or from the the following links.

I didn’t try the 40 second reset, because I really like to keep the custom settings I did outside the UI. I can of course try the reset to see if the disk basically can function in the device, but I hope there’s a solution where I can re-use my current settings (maybe clone all files on the partition from the shell after the reset?)
This is also the reason why the instructions from @superswade are my preferred steps to take at first (but of course I will if there is no solution to keep my current settings along to the new disk).

I didn’t try a sector by sector clone yet. So that’s different from the one in the guide in the opening post? If that will keep the partitions, that would be great. Did it work for you, @Bennor?

I didn’t try a sector by sector clone yet. So that’s different from the one in the guide in the opening post? If that will keep the partitions, that would be great. Did it work for you, @Bennor?

Haven’t used Clonezilla in a few years so don’t remember if sector by sector clone was part of the default option or if one has to select the expert mode. From what I remember I used the default mode but that was a number of years ago so the program may have changed since I last used it.

I didn’t extend the largest volume yet, only did a clone in CloneZilla with both disks connected via an USB adapter with the exact steps from @Proglin’s opening post.

Hi @robertl87. Years ago when I wrote this guide I used direct sata connections:

My guess is there is an issue using USB to SATA. But I’m justing guessing

I have tried a few things over the past few days, and am back here to report back on them. The good news is that it finally worked out. The bad news is that I don’t know exactly what finally did the trick.
I did the copying again via CloneZilla, via expert mode with the option -q1 (sector by sector) - again using two USB to SATA adapters. Then immediately I looked at the disk in Gparted and unfortunately the partitions looked the same again as after the previous attempts. I then (stupid of course) did not bother to stick the disk in the NAS to see if it worked, but I went right on, to try other tools.
If I am not mistaken I then started a sector by sector clone in the Windows tool HDClone.X.4.FE. However, this took so long (expectation of >12 hours) that I stopped it at 1%, because I didn’t think the chances of it succeeding were high (because why would a Windows tool transfer Linux partitions correctly?).
Then I made bootable USB sticks from Ultimate Boot CD and SystemRescue and started SystemRescue to try one of the tools. Just to be sure, I booted Gparted from there to see which drive I needed to have (sda, sdb, etc.). To my great surprise, I saw the correct partition labels there on the new, large disk.
I then immediately built the disk into my NAS, and booted it, and it worked!
I did worry that the one percent of HDClone had messed up the entire partition structure or data, but so far I haven’t found any corrupted files or partitions.
I then expanded the largest partition so I could make use of the full space of my disk, and now it’s been running for a day to update my backup again.
Now what finally did the trick, I don’t know, but either CloneZilla or HDClone (or the combination of both

) fixed it. Hopefully there are indeed no corrupt files popping up later.
Thanks all for thinking with me!

Has anyone tried upgrading the ext3 data partition on a WD NAS Gen1 devices to ext4? Any benefit from doing that? The Linux kernel on my old Gen1 NAS is 3.2.26.

Thanks for any info!

Have you run lsblk -f via SSH to see what format the My Cloud data partition (sda4) is formatted to? 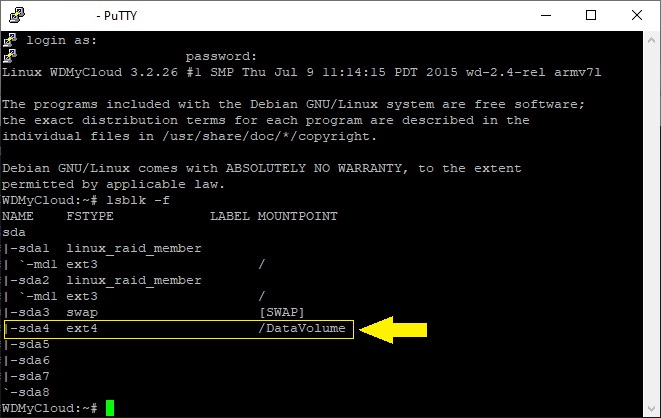 If one’s first gen single bay My Cloud sda4 data partition isn’t formatted for EXT4 one could likely attempt to reformat it. One will likely loose all user data on the partition if they do so. So backup the user data prior to attempting to reformat. One may have to extract the My Cloud hard drive and connect it to a Linux PC to properly format the sda4 partition for EXT4. Trying to change the other partitions (sda1, sda2, sda3, sda5, sda6, sda7, sda8) format structure will likely brick the My Cloud since those other partitions are what the operating system uses to run the My Cloud. One may have to perform a System Only Restore (My Cloud Dashboard > Settings > Utilities) after changing the data partition’s format to EXT4.

One proceeds at their own risk if they attempt to reformat a single bay My Cloud hard drive partition or the entire drive itself!!!

Good call Bennor! Lol, my data partition is already ext4! For some reason I thought it was ext3; maybe I was thinking of the other partitions. The RAID partitions are ext3, just as yours are. She’s an old girl! Way out of support time. Yes, running the v04.06.00-111 firmware - I’m sure that will be the last ever made for these things.

I’ve been messing around with TrueNAS a bit lately on a spare PC. Good stuff! Also Open Media Vault and Universal Media Server. I’m thinking about building something new but I want to have a NAS (probably only RAID1) that I can also run as a webserver. I’ll be running some derivative of Ubuntu as the OS.

Have you ever used the btrfs file system by chance? I’ve been looking into it as a replacement for ext4 on the new system. I’ve read good things about it but it’s supposed to be a bit slower than ext4.

Have you ever used the btrfs file system by chance?

I think a Synology NAS I’m running uses BTRFS or some hybrid form of it. Each partition format has its benefits and tradeoffs.