I have a thunderbolt 2 G-RAID 20TB Drive configured as Raid 1 to mirror my photograph library. After multiple hard disk failures on other drives (edit for clarity other manufacturers, not my G-RAID), I’m about to invest in a new thunderbolt 3 version.
I want to check the status of my current drive (about 4-5 yrs old) and having spoken to my supplier I downloaded the G-RAID with Thunderbolt Configurator.

However when I run the app, it doesn’t give me an option to check configuration, or update firmware, just ‘Configure’. I don’t want to do that until I’ve backed up onto my new drive as I’m worried that configuring the drive may also erase the data.

I can see a big green tick, which I presume is telling me both disks are healthy. Is there any other utility I can run to check disk integrity? And, is it possible to check to see if firmware needs updated without pressing configure? (you can see the firmware number in the screenshot). 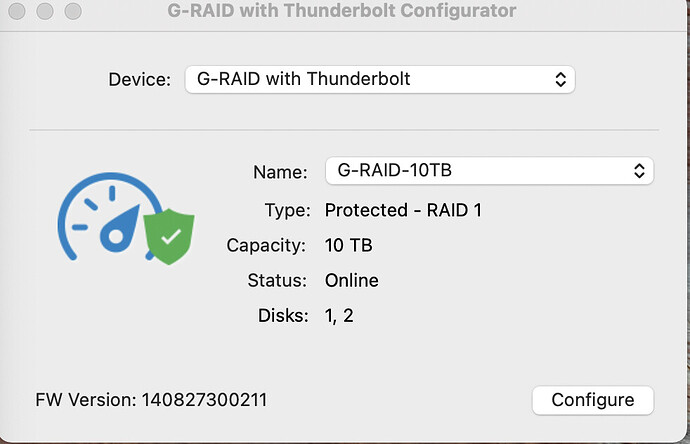 A few weeks ago, one of the disks failed in this drive (over 6 years old) and I have replaced that drive. Had lots of problems trying simply to reconfigure - the sound drive updating the new drive - and after working on it more than a week(!) I decided to ease then reinstall from my onsite backup.

I’m still a bit worried about the integrity of the Raid Drive, as the firmware has not been updated.
Firmware version: 140827300211
When I search the WD site, it tells me this is no longer supported.
When I run the G-RAID Configurator app, it gives me an option to update firmware and asks me for a local file to update firmware. Yet, I see no place on the WD site where I can download the updated firmware.
I can’t believe that a more than 6 yr old disk has not had firmware upgrades as the company has developed the hardware…

Does anyone from engage with this site?

Not sure if you have addressed this issue. Anyway, just want to say that the Configurator app does have a function “Check for Firmware Update” which is supposed to check and probably download the latest firmware file from the WD’s website, and that should feed the subsequent update using the function “Firmware Updater”.

However, I have never able to use that Check function as it always gives me a SSL error. It could be due to an expired Certificate from the WD website, or something else.